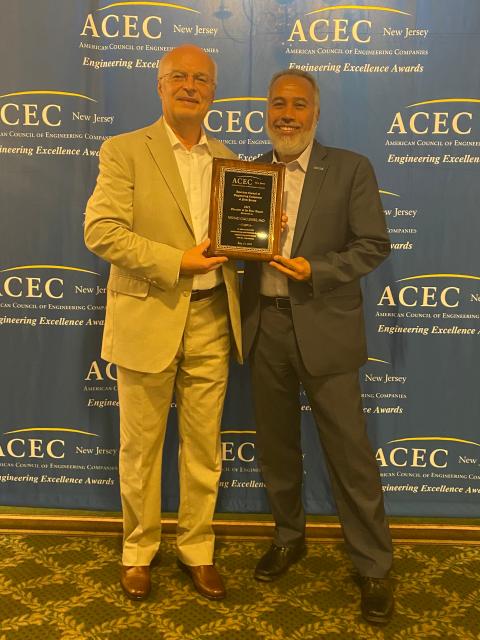 At the American Council of Engineering Companies of New Jersey’s (ACECNJ) 50th Annual Engineering Excellence Awards Banquet in July, Department of Civil Engineering professor and chair Nenad Gucunski was recognized as the 2021 Educator of the Year.
The award honors educators in engineering who have both positively impacted the profession by inspiring the next generation of engineers and who also, as professors or administrators in New Jersey engineering schools, are leaders in the field.
“Nenad is a wonderful colleague,” says School of Engineering Dean Thomas Farris. “This is well-deserved recognition for all Nenad has accomplished both as an outstanding educator and as a world-class researcher who continues to make significant contributions to the field of civil and infrastructure engineering.”
“Being in academia and being an educator for more than 30 years has been and is a very fulfilling professional experience,” says Gucunski. “While I have done so many things in academia, educating the next generation of engineers and researchers, whether through instruction or mentorship, is the most rewarding component of what I do.”
In addition to his CEE departmental roles, Gucunski directs the Infrastructure Condition Monitoring Program (ICMP) at CAIT, Rutgers’ Center for Advanced Infrastructure and Transportation.
He has developed and applied nondestructive evaluation/testing (NDE/NDT) technologies to assess and monitor the condition of transportation infrastructure, with a focus on bridges. An internationally acknowledged authority in NDE/NDT technologies, Gucunski’s practical and research expertise includes the development of deterioration and predictive models, automation and integration of NDE technologies, and the integration of NDE and remote sensing.
Along with his work in various seismic, ultrasonic, and electromagnetic NDE techniques, he has also conducted research in the areas of geotechnical earthquake engineering and dynamic soil-structure  interaction.
His research was supported, among others, by awards from the National Science Foundation (NSF), National Institute of Standards and Technology (NIST), United States Department of Transportation (USDOT), Federal Highway Administration (FHWA), and New Jersey Department of Transportation (NJDOT). In addition, Gucunski has advised several state, regional,and federal agencies and groups as a technical consultant.
Gucunski is a noted thought leader, whose portfolio includes more than 250 publications on various aspects of research and development and assessing transportation infrastructure with NDE technologies.
He is an active member of ASCE, and other professional societies, as well as an elected member of NDT Academia International. This summer, on the recommendation of several faculty from the School of Civil Engineering at the University of Zagreb, he was elected an international member of the Croatian Academy of Engineering.
Gucunski’s research-related awards include the 2014 ASCE Charles Pankow Award for Innovation, which recognized his development of a Robotics Assisted Bridge Inspection Tool (RABIT) for bridge decks. THE ACECNJ award is not the first time his dedication to teaching has been recognized: in 2013, he was named the School of Engineering Faculty of the Year.
“I accepted the ACECNJ Educator of the Year award not only as a recognition of my years in academia, but also as a recognition of the work of my colleagues at Rutgers,” Gucunski adds. “In great part, my success is a result of a wonderful collaboration with my colleagues that has helped us create a very positive and stimulating educational environment for our students.”