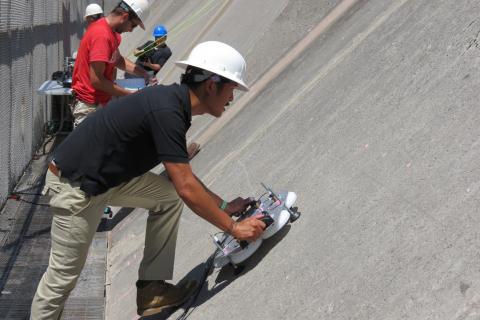 When the Robert Moses Niagara Power Station in Lewiston, New York began generating power in 1961, it was the largest hydropower facility in the Western world. According to the New York Port Authority, it is now the fifth largest hydroelectric project in the United States and the biggest electricity producer in New York state.

This past July, Nenad Gucunski, chair of the Rutgers School of Engineering’s Department of Civil and Environmental Engineering and director of Rutgers Center for Advanced Infrastructure  and Transportation’s (CAIT) Infrastructure Condition Monitoring Program (ICMP), led a team demonstration of non-destructive evaluation (NDE) technologies on the massive dam.

“We used NDE technologies to inspect the dam and test for internal damage,” said Gucunski, who was recently named 2013 School of Engineering Faculty of the Year.

The team was looking for areas of corrosion and delamination—internal cracks that are in most cases the result of rebar corrosion—within the reinforced concrete structure. The tests led to an innovative collaboration with Southwest Research Institute and International Climbing Machines (ICM), in developing a remote-controlled robotic system that can inspect concrete dams.

The Electric Power Research Institute (EPRI), a non-profit organization that conducts research related to the generation, delivery, and use of electric power, had asked Rutgers to participate in a project to assess the ability of NDE techniques to evaluate the condition of the dam.

“This project supported EPRI’s research efforts to investigate alternate inspection techniques and delivery mechanisms for concrete infrastructure in the electric power industry,” says Gucunski. “Such tools could enable assets like hydro dams, cooling towers, and nuclear containment buildings to be inspected as safely and efficiently as possible.”

“Our main objective was to demonstrate novel NDE technologies in the condition assessment of the Niagara Dam concrete structure,” explains Gucunski.

Tests went smoothly, despite challenging weather.  Gucunski said the air temperature was close to 100º and the concrete of the dam, measured by an infrared thermography camera, was 125º. Kee and Pailes spent time in the bucket of the crane in the blistering heat, deploying several specific technologies.

The engineers also demonstrated a new technology—air-coupled acoustic array—that CAIT developed in its ANDERS (Automated Nondestructive Evaluation and Rehabilitation System) project, funded through the Technology Innovation Program of the National Institute of Standards and Technology (NIST-TIP). According to Gucunski, it makes it possible to conduct a rapid, comprehensive assessment of concrete quality and detect invisible internal delaminations.

“Instead of using traditional contact sensors, the array uses six microphones to record the structure’s response to a small impact,” he notes.  “We found some minor damage—zones indicating corrosion and some small delaminations—that should be repaired soon to avoid costlier, more extensive repairs,”

Pleased with the results of the demonstration, EPRI has asked Gucunski to move forward and work with the International Climbing Machines and Southwest Research Institute to build and install NDE sensors on its robotic crawlers. Sticking to vertical or sloped surfaces, these robotic devices are able to move around and safely conduct potentially dangerous structural assessments.

“These technologies will help the power industry ensure that their older structures remain structurally sound and in service for years to come,” says Gucunski.