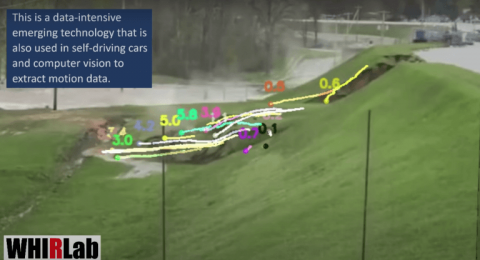 Using cutting edge technology stemming from augmented reality and connected vehicles, a CAIT researcher presents a potential new way to analyze infrastructure failures despite a lack of available data — as was the case in the Edenville Dam failure.

This May, the Edenville dam in central Michigan collapsed due to heavy rain in the area, causing extensive flooding and the evacuation of more than 10,000 residents in the Midland and Sanford area.

Due to the unexpectedness of the dam failure, little information and data were collected outside of a cell phone video captured by a witness on the scene. With more data, it would become possible to do a more thorough analysis of the dam failure — helping to understand the root causes of the failure.

That is what inspired Roger Wang, an assistant professor of civil and environmental engineering at Rutgers, to create a 3D video model of the Edenville Dam failure based on the video captured. Dr. Wang is also a member of the Infrastructure Resilience Program (IRP) at the Center for Advanced Infrastructure and Transportation (CAIT).

“This incident was so sudden that only a mobile phone captured a short video of the process,” Wang said to MLive.com about the research. “We wanted to obtain a 3D dataset to help numerical modeling and eventually to identify the deep causes and the detailed process of the dam failure.”

A video of the 3D model created by Wang and the Wang Hydro-environment Informatics Research Lab (WHIRLab) can be viewed here. His group recently developed this new technology to create the 3-D reconstruct of the dam collapse using frontier computer vision and augmented reality.

Wang said that his team used various methods to create the 3D video model of the exact moment the dam failed during flooding such as video stabilization and optical flow to capture the dam deformation, digital elevation model (DEM) and ground control points to manually correspond the image pixels to the DEM map, and augmented reality to reconstruct the 3D model.

Despite the data limitations, he said that the team’s method has potential to collect valuable information from video and photo data to inform engineers in future infrastructure failures and events.

“The new technology stemming from self-driving cars and augmented reality may bring us a step closer to the sci-fi world and provide great insights into a recent catastrophic disaster,” Wang said. “Here, we present our exploratory study using emerging computer vision techniques to hack the limited data source.”