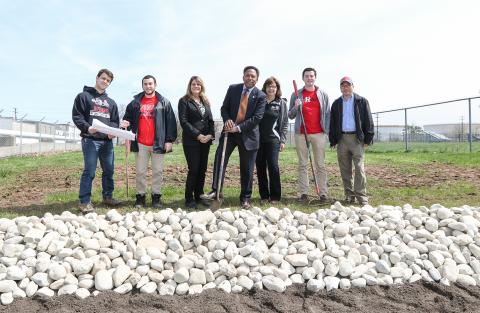 Phillips 66 Bayway Refinery has donated $60,000 for a project spearheaded by Rutgers University and the City of Linden, New Jersey, to install a rain garden that will mitigate flooding in Linden’s Tremley Point neighborhood. A natural water filter, the rain garden will also restore wetlands and improve the local ecosystem and recreational space.

Faculty members and students from the Rutgers School of Engineering are now working with Linden’s city engineer—Rutgers School of Engineering alumnus George Vircik—and a local consultant to design and construct the garden. The 50 feet long by 40 feet wide ground depression will intercept and slow down storm water runoff from paved and other hard areas while filtering out dog-produced pathogens from a nearby dog park. Native plants planted by local volunteers will assist the process and also provide food and habitat for birds, butterflies, and other pollinators. The City of Linden will maintain the garden with guidance from the Rutgers team.

“The project was conceived to help address flooding in a vulnerable working class community of approximately 275 homes located in an industrial area,” explains Dr. Qizhong (George) Guo, a professor of civil and environmental engineering at the Rutgers School of Engineering and a widely recognized flooding expert.

The Rutgers team traveled to the area a few years ago during a post-Hurricane Sandy flood study, sponsored by the New Jersey Department of Environmental Protection, to identify the causes of the problem, which were primarily rainfall induced flooding and tidal flooding from the Arthur Kill, via the Rahway River. Putting their education to practical use, the students brainstormed and designed a solution, which Guo describes as “wonderful hands-on education.”

The project dovetails with a much larger $2.7 million ongoing flood mitigation and ecosystem restoration project for Marshes Creek in the City of Linden recently funded by the National Fish and Wildlife Foundation (NFWF). It is a collaborative effort between Rutgers, the City of Linden, Phillips 66 Bayway Refinery, and other area partners.

Headquartered in Houston, Texas, Phillips 66 is a diversified energy manufacturing and logistics company that processes, transports, stores, and markets fuels and products globally. The company’s Bayway Refinery, located on the New York Harbor in Linden, New Jersey, was built in 1909.  It employs approximately 800 people and processes mainly light, low-sulfur crude oil and distributes transportation fuels, petrochemical feedstocks, home heating oil and other refined products to East Coast customers by barge, truck, pipeline, and railcar. Phillips 66 has supported other Rutgers initiatives led by Dr. Guo, including a $75,000 grant to the School of Engineering in 2015 to help enhance drainage capacity of the Marshes Creek, the other important component of the overall flood mitigation and community resiliency effort. www.Phillips66.com