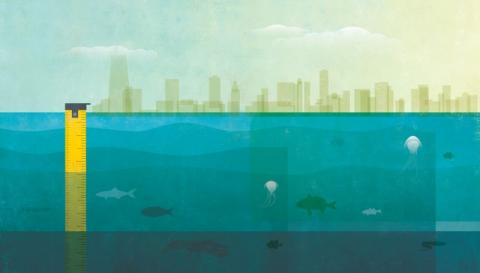 CEE professor Qizhong (George) Guo participated in a series of essays that appeared in the Star-Ledger on Sunday, June 23, discussing how we can adapt to the rising sea along the New Jersey coast. According to Guo, in New Jersey’s effort to adapt to rising sea levels, we are facing infrastructure challenges on two fronts – structural deterioration and environmental change. This is the time,he says, for us to tackle both fronts together by replacing or retrofitting the aged infrastructure into a resilient one, preferably through mobile and green means.

What are the consequences of sea-level rise?

First, nuisance flooding during high tides even when there is no rainfall as has already happened in low-lying coastal areas in New Jersey and elsewhere. Second, saltwater intrusion into aquifers that threatens the potable water supply. Third, more frequent and severe flooding during rainfall events as the urban storm drainage systems and/or rivers are backed up by the higher sea level. And fourth, higher levels of water, flooding and erosion during hurricanes and nor’easters as the storm surge is superimposed on a higher sea level, among other consequences.

What are the straight-forward ways to deal with the sea-level rise?

Elevation, seawall, pumping and relocation/retreat. For example, the city of Miami Beach, Florida, is spending $500 million to raise roads and seawalls by 2 feet as well as to install pump stations for about $2 million per block. Also, the few dozen residents of Isle de Jean Charles in Louisiana, a rapidly disappearing island in the Gulf of Mexico, are to be relocated through a $48 million federal grant.

Why do I prefer mobile infrastructure?

First, the sea-level rise projection is uncertain. For the New Jersey shore, it was projected to rise by end of this century from 2.5 feet to about 6 feet. Second, infrastructure that is mobile and vertically and/or horizontally extendable would be much easier to adapt to this large range of projection. Mobile infrastructure can be adjusted as the sea level rises or when a hurricane is approaching.

Why do I prefer green infrastructure?

What mobile and green measures have already been implemented?

First, beach replenishment and sand dune restoration is a mobile and green solution already in action at the Jersey Shore. A study for Delaware in 2001 found that one dollar spent on beach replenishment would prevent four dollars in loss from retreat. However, the sediment budget should be further assessed for sustainability of this practice as well as the costs and benefits far into the future. Second, clean sediment accumulated in navigation channels has been dredged to fill up drowning wetlands. Sediment inputs from uplands/watersheds are expected to change as the climate changes through rainfall and land cover changes, and an assessment of these sediment changes will help experts decide how much sediment can be dredged in the future. Third, stormwater green infrastructure such as rain gardens and porous pavements are being actively implemented to mitigate local flooding by reducing and/or slowing rainfall-generated runoff. For example, we have constructed six rain gardens and two porous parking lots in Linden, NJ. The co-benefits of green infrastructure as well as the methods and costs of maintenance should be further understood and quantified.

What additional mobile and green measures have been proposed?

Since Superstorm Sandy, we have researched coastal flood mitigation measures and proposed a framework for developing comprehensive strategies. Those strategies include consideration of threats from different sources of water, different levels of threats and vulnerability, different types and functions of measures and different aspects of assessment. We have additionally proposed:

For New Jersey to adapt to rising sea levels, we must be open to innovative ideas and social, technological and environmental changes. The dual challenges of infrastructure deterioration and climate change present us with a great opportunity to collaborate and put our innovative thinking to use.

To read more about Rutgers’ work on this issue, visit impact.rutgers.edu/the-rising-tide.