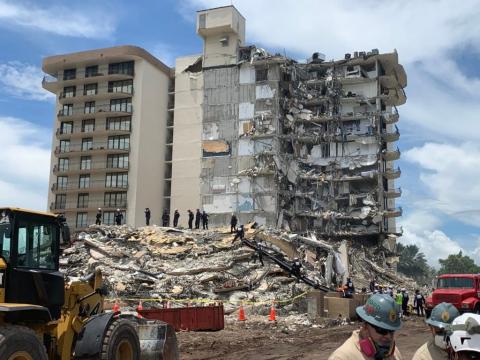 On the night of June 24, 2021, Champlain Towers South, a 40-year-old 12-story beachfront condominium building in Surfside, Florida partially collapsed. On Sunday, July 4, the rest of the building was demolished. A month later, 97 bodies have been recovered from the 22 million pounds of debris that have been cleared from the site. Once the recovery efforts end, the forensic investigation into the cause of the tragic collapse will begin in earnest.

Here, Rutgers School of Engineering civil and environmental engineering professors Nenad Gucunski and Husam Najm share their expert understanding of and insights into the factors that could lead to such a disastrous collapse.

Gucunski is a professor and chairman of the Rutgers School of Engineering Department of Civil and Environmental Engineering (CEE). A world-renowned expert in nondestructive evaluation technologies, he also serves as the director of the Rutgers Center for Advanced Infrastructure and Transportation’s (CAIT’s) Infrastructure Condition and Monitoring Program (ICMP). He was recently named 2021 Educator of the Year by the American Council of Engineering Companies of New Jersey (ACEC-NJ).

CEE professor and undergraduate director Husam Najm specializes in the use and understanding of various concrete admixtures and has extensive experience in designing, detailing, and constructing pre-tensioned and post-tensioned concrete bridges. He is also a leading expert on the properties of high-performance fiber-reinforced concrete. He was selected by the American Society of Civil Engineers (ASCE) as its Central Jersey Branch Educator of the Year in 2019.

Najm: Near the ocean, chloride from evaporated salt water and gets on buildings. Over time, it can get through even very small cracks in concrete structures. The chloride is very bad for steel, which is part of concrete construction. It corrodes and rusts and debonds from the concrete.

Gucunski: There is no question this deposited salt will lead to corrosion. While we don’t have the final explanation of the primary causes of the Surfside condo’s collapse, from the little we have heard and as was reported, there was significant corrosion deterioration and significant damage from leakage from a pool above the building’s garage level.

Are there significant structural differences between urban and coastal hi-rises?

Gucunski: There is certainly a difference as structures in coastal areas are exposed to a saltwater environment and high winds, which means salt can be carried and deposited on structures that aren’t directly on the coast, but that actually can be a mile or more away.

Gucunski: The best management involves timely inspection and early intervention. This also leads to reduced life cycle costs. We could draw an analogy between the infrastructure and how we manage our own health with regular check-ups.

In this case, we know a 2018 inspection spoke about the pool deck’s failed waterproofing that was causing major structural damage, saying that without intervention, it would expand exponentially. A second inspection in 2020, confirmed significantly more deterioration.

In addition, we have better protective systems such as various types of protective coatings for structural elements today than we did 40 years ago.

Najm: For foundations, we would need to protect the steel more. For normal conditions, there is generally a one-inch cover of concrete. With a three-inch cover, there is more protection.

How is climate change impacting building infrastructure in general, especially in coastal communities?

Gucunski: We should be very concerned about climate change in coastal areas, as roughly 55% of our population live within 60 miles or so of coast and are at risk of intense storms and flooding.

Najm: Sea levels are rising, and water is getting closer to the shore, causing erosion. Waves and winds from hurricanes cause further damage. Even rivers, as we have recently seen in Europe, are rising, and flowing at high speeds, eroding banks. This flow of water is so destructive – it can demolish bridges and erode the soil around foundations.

How does soil impact a building’s structure? And why are differential settlements important in adding forces to structural elements?

Gucunski: Problems can typically result from a differential settlement. Soil is a natural material, so it might not have equal characteristics under the whole area of a building. Some areas could be more compressible, so you might observe higher settlement on one side of the building than on the other.

With a uniform settlement, the whole building would move and maybe affects some functionality of utilities – but it’s not going to introduce significant forces into the building’s structural elements.

But if one side of the same building settles a little more, you would feel disruption from significant forces introduced by differential settlement. In reinforced concrete structures, a combined effect might produce a collapse, since some of the elements could be weakened from deterioration and at the same time exposed to additional loads from differential settlements.

Have there been any significant structural and/or material innovations or improvements that have been put into effect in the 40 years since Champlain Towers South was erected?

Najm: Absolutely. Galvanized steel round bars that have been dipped or painted with zinc are highly resistant to corrosion. This is more expensive, of course. Stainless steel bars, while really expensive, could be worthwhile for some projects. Concrete mixtures have been improved so that it doesn’t crack as quickly. It’s a matter of wanting to invest more money in construction to avoid expenses in the future.

There have also been improvements in building design. Today software helps us check everything. In the past, some measurements were approximate and relied on engineering common sense.

Quality control is very important, and the quality of a building’s material is really critical if a structure is to last. Concrete is a complex material. Forensic engineers are drilling through walls in the standing twin building to take core samples that will be tested in the lab. With this collapse, you can’t throw anything out – there could be a design error or material quality could be an issue. We don’t know for sure, although I highly doubt it.

There have also likely been changes in design regulations and codes to improve safety.

Whether any of these things – design, construction, materials, quality control, or building codes – could have made a difference in this case, we won’t know until the reason for the condo’s collapse is found. And that could take a couple of years in my opinion.

Why is nondestructive evaluation so critical to the inspection process of infrastructure and buildings?

Gucunski: There are technologies today that allow for early problem detection. By the time you see a problem – such as signs of corrosion on a building surface – it’s already highly progressed. When we see spalling –cracked areas on the surface of concrete – it’s often the result of advanced rebar corrosion from a corrosive environment.

Cost seemed to be a big factor in not moving forward quickly with building repairs at Champlain Towers. Can regular maintenance minimize exorbitant costs?

Gucunski: Yes. We know this so well from transportation infrastructure, because it deteriorates much faster than buildings’ from its direct exposure to loads from heavy trucks and environmental factors, that regular maintenance and timely rehabilitation are the most effective and economic ways to retain good infrastructure performance.

Thankfully, collapses like this are not something seen in the U.S. with any regularity. What impact do civil engineers have on the safety of buildings?

Najm: We have a big impact. There are many committees – of university professors, professional unions, government officials, and construction industry leaders – who meet every year to see what changes need to be made. Changes come from these committees, which are very, very important. Many of our faculty are on these various committees.

Gucunski: How I see it is that we’ll have to make some adjustments in how to ensure the safety of buildings. Unfortunately, this is usually done after a disaster event. After the Silver Bridge, which connected Ohio and West Virginia, collapsed in 1967, a federal mandate required bridge inspections every two years.

We’ll likely see some new regulations at the federal level which will require more frequent building inspections, especially for those in coastal areas that are exposed to more severe environmental conditions. We may also see some changes in regard to design requirements. Owners will be required to inspect and intervene in a timely manner. Taken together, these changes will, most importantly, save lives.